Australian airline Qantas Airways operate a number of daily services between Auckland, Wellington, Christchurch and Queenstown airports to major Australia cities. Qantas no longer have a direct domestic presence in New Zealand, however their lost-cost subsidiary Jetstar operates a number of domestic trunk and regional routes within New Zealand.

Qantas Airways is a member of the OneWorld global airline alliance.

More information can be found on the Jetstar page.

Qantas operates direct flights from Auckland, Wellington, Christchurch and Queenstown airports to Brisbane, Sydney, Melbourne and Perth. As Qantas does not have a direct domestic presence in New Zealand, passengers can connect to Jetstar regional services, and outbound travellers can connect in Brisbane, Sydney, Melbourne or Perth to a large number of Qantas or partner services worldwide.

Qantas is a member of the OneWorld airline alliance, and also codeshares with a number of carriers including Emirates. All Emirates services operating out of Auckland and Christchurch airports also carry QF flight numbers, and can be booked through Qantas, including using Qantas Frequent Flyer points.

Detailed route information can be found via the Qantas Route Map. 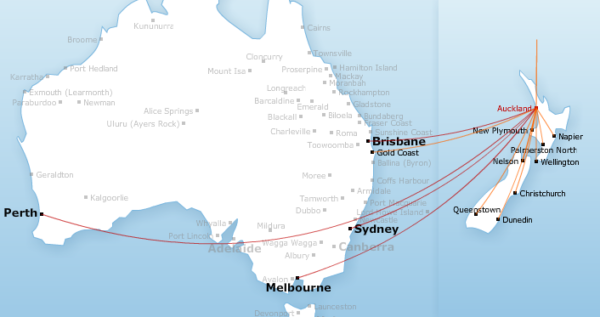 Qantas Frequent Flyer members can redeem frequent flyer points for flights on either Qantas, Jetstar, OneWorld Alliance and other Qantas airline partners (Such as Emirates) through the Qantas website.

More information about the program can be found on our Qantas Frequent Flyer (QFF) page.

Gold, Platinum, Platinum One or Chairman's Lounge tier members of the Qantas Frequent Flyer program and paid Qantas Club members are able to use Qantas International lounges when travelling internationally on either Qantas or Jetstar operated flights or domestic Qantas Club lounges if travelling domestically within Australia.

In New Zealand, Qantas operates international lounges in Auckland and Wellington, with passengers in Christchurch and Queenstown able to access the partner lounge, the Manaia Lounge. First Class travellers or Platinum or above Frequent Flyers can instead use the Qantas First Class lounges in Auckland or other Qantas lounge locations worldwide.